Rebirthing a Sister for my Cousins

We tunneled toward each other, neither knowing of the other, where the point of joining might be, or even if there was one. One evening an Ancestry message, “cousins maybe??,” blasted through the uncertainty.

Hi you came up on my DNA chart as a possible cousin. I was adopted at birth in 1965 & know nothing about my birth parents so I’m flying blind, but I thought I would reach out....
[1]
I held my breath, my mind racing. I had tested with the three major genealogy companies, out of curiosity, mostly, not purposefully. And I know or know of all my first and second cousins and their families. Except one. When I was a teen my eldest girl cousin gave birth to a child she gave up for adoption. I remember that. Here we were as children in 1949, Janie in the middle and me on the far right. 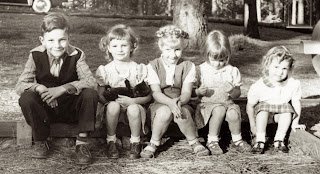 Research into the child’s identity led always to dead ends. Even my aunt’s recollections failed me. Finding him or her would bring completion to our family, I felt, and maybe to the adopted child, too.

This DNA cousin was born in 1965, the year of my cousin’s child’s birth. Could she be the one? My new cousin hadn’t yet posted a profile photo on Ancestry, so I couldn’t compare and be sure. I checked the match details: predicted first or second cousins, confidence extremely high.That works for a first cousin once removed.
[2]

Tears burned my eyes. My heart quickened. Was she the child I’d looked for and always hoped to find? I responded:
Hello! Please tell me about you. Where were you born? What is your birthdate?[3]

I didn’t have to ask; I already knew. The response came quickly:

We could have been so close to finding each other! Yes, Arizona adoption records are closed. But on the chance that this unknown cousin might try to access the record, I had contacted Arizona’s Confidential Intermediary Program. My letter detailed his or her parents’ vital data and offered to be contacted by a member of the Court and/or the Program should the adoptee wish.
[5]

I had had no response. But now here she was! She’s the one! I knew she had been born on her maternal grandfather’s birthday, 19 December 1965. And she was actively looking for her birth parents, so she would not be blindsided by an unexpected revelation.

Your mother was my first cousin. I've been waiting years to hear from you. I will answer any questions you have.
[6]

The wait for a response seemed interminable. I couldn’t focus on anything else and slept fitfully. Finally:
Are you sure it’s me? This is a little scary after all these years & wanting to find both my Mom & Dad. I have had so many dead ends. How are you sure its me?
[7]

Oh boy, what a question to ask a genealogist! I was ready:

My cousin was married in 1964 at twenty-one. She became pregnant about six months later, but the marriage ended. She gave birth and gave up the baby for adoption. Her parents felt she was unable to care for a child as a single mother (remember the times), and they could not. The baby was born, and it's my understanding that my cousin never got to hold it. Then it left our family.

These memories, your birthdate of December 19, 1965 in Arizona, and our DNA match as first or second cousins convince me that we are in fact first cousins once removed.
[8]

We became Facebook friends right away. One look at a photo on her page of a woman who called her “Mom,” and I knew for sure: her daughter was almost a clone of my cousin and her mother.

Both of us reeled from the new information. She had so much to process!

I was told such a different story. I was told that my Mother was single & in college & that no one knew where my Dad was but that he was married & had 7 children. Do I have any 1/2 siblings?
[9]

How differently we can interpret the few facts we have to go on! I had been told that she had been adopted privately. My aunt kept for years the name of the attorney (who, she hinted, might be the adoptive father). Finally she threw out the little black book with his contact information. She could not remember (or would not reveal) his name.
[10]

I shared what I knew:

It's true that your mom was single (marriage annulled) at the time of your birth. She may have taken some college-level courses. It's also possible that she and her parents didn't know where your father was at that time. I believe he had fathered one child before his marriage to your mom, and then three more by a subsequent marriage. Your mom married again and had three more daughters. Yes, you have half-siblings!
[11]
Finally she asked the big questions:

Do you know her name? Is she still alive & do you know if she ever wondered about me. I need to know the truth. Yes, it’s a lot but I have been hunting for so many years. Do you know or have pics of siblings & do you think they would want to know about me? Do you know my Dad’s name?
[12]
I sent her this photo of her parents, taken the day my parents hosted a wedding reception for them, 27 September 1964. 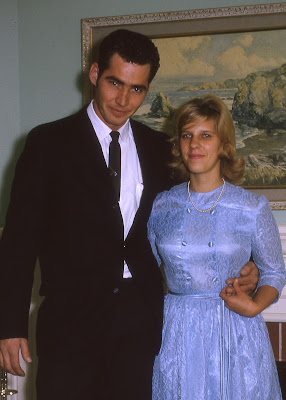 My cousin, Jane Marie "Jayne" (Kellar) Mudra, passed away in 1995 of a diabetic coma. I never saw her again after her wedding reception in 1964, but she did visit infrequently with my folks when her children were small. I have a feeling (my own memory of the time) there was great sadness about giving up her baby, that she would have chosen to keep it (you).

Your dad was Rodney Dean Loyd. Sadly, he, too, passed away at sixty-nine in 2011. This I know from information on Ancestry. I only met him the one time at the reception.

Jayne’s three daughters are all on Facebook. I chat infrequently with one, so if/when you're ready, I can contact her on your behalf. I don't know if the girls are aware their mom had another child.
[13]

Her half-sisters’ Facebook page links accompanied this message so she could see their pictures and posts and get a feel for them. Would my new cousin want to be in touch with them?

Wow!! That is a load of great info. Thank you so much. I do wish they were still alive, but at least I have answers. I would love it if you could reach out to my sisters & see if they would be interested in some kind of contact. I will understand if they say no, but not knowing is worse than rejection.
[14]

Did my cousin’s daughters even know they had an older half-sister? How would they react to this news? I immediately messaged each one of the girls separately through Facebook.

Hey! You know I keep track of family, right? An amazing thing happened the other day. I was contacted by a woman, who matches my DNA as a cousin. I've confirmed that she's your half-sister, born before your mom's marriage to your dad. She's a good person and would like to be in touch with you and your sisters. Here's her Facebook page link [deleted for privacy]. Hope all's well with you! —Judy
[15]

Within seconds all three had responded:

What followed was an outpouring of love and tears of joy held in suspense over four decades. In the moments and days since April 12, 2017, messages have been flying back and forth among the sisters and their children, connecting and sharing family. They plan to visit each other and commemorate their sisterhood with matching tattoos. It was my privilege to act as midwife in this long-labored birth, along with Ancestry.com and Facebook. In the end, the connection happened in a matter of minutes, and the results will last a lifetime.

The last word belongs to my new cousin April: “I love happy endings or new beginnings or both!!”
[17]