Easter in the Middle

We were a middle-class family living in the middle of California in the middle of the last century. This is what we looked like on Easter Day 1949. We had been to church with our grandparents. We all dressed in new clothes for the holiday. New shoes (no play clothes), new haircuts and suits for the boys, and curled hair and bonnets for the girls. We were dressed for “good.” Besides, we weren’t allowed to play much (no games), so we weren’t going to get dirty. We were together, our grandparents, three of their adult children and spouses, and us five grandchildren. The big focus (after the Easter egg hunt) was Easter dinner with ham, potato salad, Jell-o salad, pickles, and plenty of desserts. Those were the “good old days” we remember fondly now. Grandma kept these photos commemorating the day with her family, all of us together. 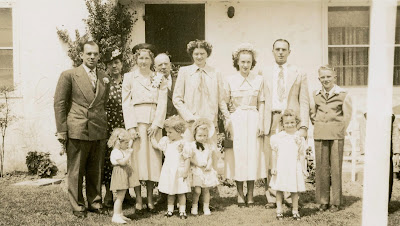 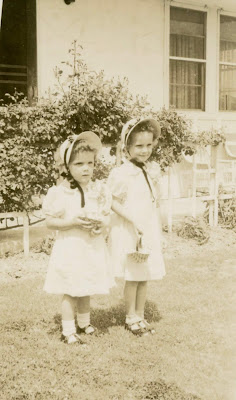 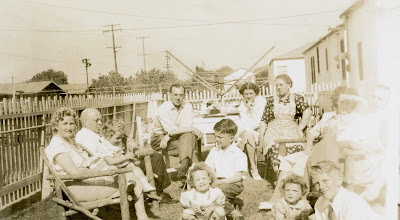 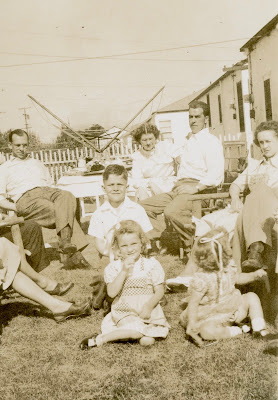 “Who are these two little varmints?” Red’s gruff voice startled his cousin’s two little girls, not used to this abrupt address. They were teens the next time they saw Donovan, as he was known to them. He had come down from a place in the California mountains called Stirling City to pay respects to their grandfather, his uncle. Wearing a dark suit and talking with other men he seemed to know, he was an unknown person. He was vaguely related to them, it seemed, and lived in that faraway mill town where their father had grown up.

Some thirty years later one of those girls and her family found Red sitting outside his home in an easy chair salvaged from the garbage dump, ready to have an afternoon snooze. He had been to church in the morning, the Assembly of God, and had had some stew. He was still dressed for Sunday in new, clean blue Levi’s, a tan Penney’s work shirt and black dress shoes.
Several cords of split and stacked firewood sat piled in his yard. His wood frame home, two years older than Red, looked to be a mill worker’s cabin and, like Red, showed signs of age. He had lived in Stirling City most of his then eighty-nine years, a community of about three hundred people who had at one time depended on employment at the Diamond Match Company mill.[1] Red, too, worked for Diamond Match in many different jobs requiring skilled manual labor. But he wasn’t from there.
Red was born William Donovan Kellar in Henderson Township, Jefferson County, Pennsylvania, 14 May 1906, to William Walter Kellar and Prudence Margaret Phillippi.[3]

At the time, coal mining was big business in Jefferson County. Throughout Red’s childhood, his father Will Kellar worked in the mines.[4] He knew about the dirty, unpleasant work down in the belly of the earth. As he reached the age to join the men in the mine, he went down and learned that he wanted nothing of it. He was at odds with his father, so what could a young man do to earn a living with only a grammar school education? Will contacted his brother John in California, who agreed to take Red under his wing. In 1924 at seventeen he left his home in the hills of Jefferson County and headed west to the clean air and giant stands of ponderosa pines in northern California’s timber country.[5]

One of Red’s first jobs in the woods was to carry water for a crew, hauling it in canvas bags on a horse.
“I liked the horse and the horse liked me,” Red [told a reporter]. “She liked me more after I get this tory told. Red said as he was taking the horse over a creek, she slipped and the water bags, which were full, toppled around her neck. The weight of the bags held her head down in the water. “I didn’t have a knife,” he said. “I always cussed for that. I got in there and held the horse’s head up. She quit her fighting. I just tapped her head and said, ‘Take it easy old gal, take it easy old gal.’ And by the tone of my voice, she knew it was all right.” Red said after a while, the crew figured there must have been trouble and doubled back to find Red and the mare in the creek. “A guy pulled his knife out,” he said. “I talked to the horse and said, ‘Everything’s OK now, everything’s OK.’ At the tone of my voice, she knew I was giving orders to get on her feet. I had no troubles with her after that. She followed me around like a dog. I saved her life, poor old thing.”[6]

Red was married once, about 1936, during his early days at the sawmill. He was working long hours, fifteen and sixteen hours a day. He had lots of work to do, and he didn’t keep company with her. So, with free time and a car at her disposal, she entertained the younger fellows from the nearby Civilian Conservation Corps (CCC) camp, one this day, another the next. Finally, she ran off with one of them, and eventually she and Red divorced. He bore her no ill will, taking full responsibility for her leaving.[7]
Over years and years of trudging the hills around Stirling City in his hobnail boots, hunting or working the logging units, Red learned nearly every inch of the land. He belonged to it, lived with it. Into his seventies, it was his pleasure to haul logs out of the forest to chop for cord wood for townspeople. When someone ran off the road, he was there with his ’57 Dodge truck to winch them up.[8] Once he had planned to go to a big celebration for senior citizens, but instead spent the time with his 4x4, winch, and block and tackle hauling someone’s stuck VW Rabbit out of a tough spot. In the 1970s a woman and her family befriended Red for life after he rescued her in a VW bus accident, saving her life.[9] Red would dismiss praise for such a feat. It was just what he did because he had the skill, the knowledge, and experience

There’s plenty of gold left in California hills, and Red’s friend Harry Sheehy opened the Butte Dix mine near Stirling City. A dozen investors put up about $150,000 in the 1920s to fund the mine, including Red and his Uncle Jack and his wife, who put up their life’s savings of $12,000. Red, skilled at whatever labor he attempted, worked along behind the driller. One day he asked Red for a drill extension. A short while later he stopped drilling, got out a cigarette, lit it with the carbide lamp, and said, “That’s the end.” He had hit soft dirt, and mud started to ooze through. They drilled; they kept trying, but they were never successful at finding that vein again. They lost it all. There’s still gold all over those hills. The vein is still there, slid up or down by some ancient earthquake, teasing prospectors and would-be miners.[10]

Red left Stirling City briefly during World War II. He enlisted in the Army as an older man of thirty-four in 1942.[11] His service took him to a number of camps stateside to give training in mountain and winter warfare under extreme weather conditions.[12] He was sent on special service to Norway and a number of other places, where he put his skill in marksmanship and on skis and snowshoes to good use.[13]
In early 1945 he served in the 14th Infantry Regiment that traversed France and then, in March and April, moved through Germany. Red participated in crossing the Danube River and seizing the city of Regensburg on 27 April.[14]  Two days earlier, at the municipality of nearby Regenstauf, he and two others saved another soldier’s life. His Bronze Star commendation letter reads as follows [**** denotes each of three men, William D. Kellar, Harold Hafner, and Dominic P. Fetta, all of Company “H”, 14th Infantry]:

For heroic achievement in action against the enemy on 25 April 1945, in the vicinity of Regenstauf, Germany. **** was patrolling the road leading into Regenstauf from the north to keep traffic cleared for Engineers building a bridge and for medical units evacuating casualties. During the patrol enemy artillery shells started to fall along the road, necessitating **** to take cover. From his covered position, **** observed a wounded Engineer lying on the road. He immediately left his covered position and went to the aid of the wounded engineer. With utter disregard for personal safety **** exposed himself to intense enemy artillery fire to evacuate the wounded man and remove him to the Medical Aid Station. **** heroic action is an inspiration to all.[15]
Red’s life stories reveal a man of great knowledge and skill, all earned over a long lifetime of hard work. In his small community everyone knew him and knew they could come to him when they needed help, from the mundane to the serious. He owned a compressor that he kept outside his house, and all the neighborhood kids would come to him to pump up their bicycle tires. Old vehicles rusted at the back of his property, and once he found a “Vietnamer,” as he called him, all curled up in an old trailer.  The fellow hadn’t eliminated in a while and was “all bound up inside.” Red got him moving around and took him in for a while. He wanted to give him something to relieve his discomfort, but had available only coffee and stew, which apparently served the purpose. His generosity and respect for life extended to a little kitten whose “water works” weren’t working. Red nursed him to health, too.

In his late eighties, Red told his minister of a dream he had had. He had to build two large wooden boxes, and they had to be just perfect. He worked hard, with a crew, and finished the first box. It was perfect. They worked more and finished the second box, but Red checked it, and it was not perfect. He’d have to get back at it and make it perfect. At that moment, he woke up. Try as he might, he was unable to go back to sleep and the dream so he could perfect that second box.