How many wearings would it take to wear a wool shawl thin?  To make it threadbare and yellowed where it lay again and again against the wearer’s neck, absorbing the oil from her skin and the cares of her soul?

Betty’s shawl bears scars of wear and time.[2]  No one knows when it was made or purchased.  Its plaid pattern, fabric, and size suggest it was a Bay State shawl, manufactured in the U.S. from the 1850s, when fashionable ladies wore them, through the 1890s, when they were mass produced, inexpensive, and available even to the lowest classes.[3] Betty’s shawl is thin and light, but not soft to the touch.  Likely a utilitarian accessory, she would have worn it daily for warmth rather than for special occasions. 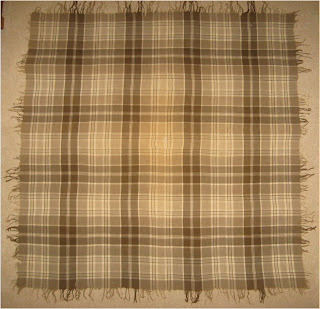 She was a young woman in rural Pennsylvania when the shawls were first manufactured in the U. S.[4] By the 1880s, when mass production was at its height, she was a widowed farmer’s wife with five children ten years and younger.[5]  She survived and sustained her family on leasing her farm for shares of production and on making and selling butter.[6]  She would have folded the square on the diagonal and tossed it quickly over her shoulders before running outside on a cool spring or autumn day.  In winter she may even have worn it indoors, pulling it close around her as a surprise storm blew snow in through the front door’s keyhole.[7]

Day after day, season after season, for many years, this shawl, and maybe others like it, protected the young mother, the mature woman, the elderly grandmother.  She may have worn it until she died in 1902, certainly out of style by then, but comforting in its familiarity.[8]  Her children kept it.  To them it probably meant “mother.”