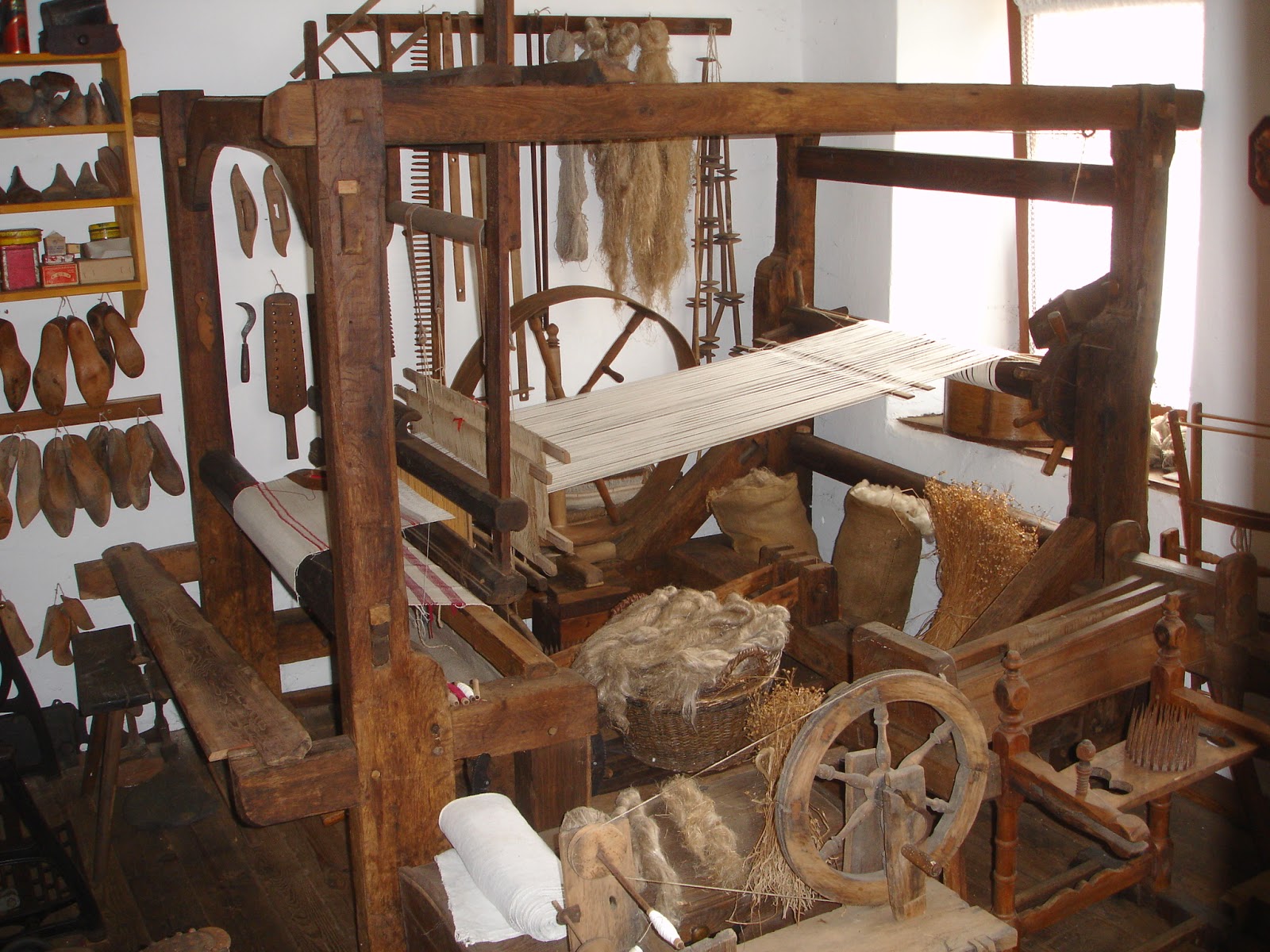 The Weaver’s Wife[2]
Her husband Frederick sat at the loom in his weaving room, older than she by ten years, confident in his occupation and status in the community. She could see him behind the large timber uprights, working on a coverlet from a neighbor woman’s blue and white wool yarn. The fineness of the woman’s spinning and the quality of Frederick’s workmanship guaranteed a lovely product. Frederick produced all manner of fine and coarse cloth goods for the local farm community, from coverlets to grain sacks. The farmers’ wives brought him the homespun wool yarn from their sheep and the tow and linen yarn they painstakingly prepared from their flax. He transformed it into shawls, fabric for clothing, bedding, towels, and kitchen linens. Her husband’s craft was important to this western Pennsylvania farming community.[3]

The Young Mother
Wed to the weaver as a teenager, Friederika was just eighteen when her first child was born, a son.[4] As he reached toddlerhood, she had to keep him away from the threads in the weaving room. Her second child, born two years later, was also a son.[5] This was good because the boys would grow up to help her husband on the farm. Like most professional weavers, Frederick also had a small farm, forty-seven acres, to help feed his family.[6] It was forested land, and clearing it was hard, tedious work. As the boys grew up they would be able to help with logging and digging up stumps so the land could be tilled.

In early 1856, Friederika gave birth to a daughter, a promise of help with the household, animals, and the kitchen garden.[7] The next year her husband bought two oxen.[8] Frederick would then have help clearing the land and could plant more food for their growing family. The labor pains came again in 1857 with another daughter and still another in 1860.[9] By that time Frederick had cleared eighteen acres and his harvest for the year brought in a bushel of peas, three of potatoes, a little rice, some oats and buckwheat. There was enough tobacco for his pipe, too. Butchering the four cattle and three pigs provided meat, and Friederika churned 150 pounds of butter.[10] Compared to their neighbors, this was not a lot of produce, but Friederika could count on her husband’s weaving to bring in the remainder of the family’s food needs in trade.

In eleven years, Friederika bore five children, pregnant for nine months, then feeding the new baby for about a year until she weaned it and became pregnant again. She gave birth to a fourth daughter in 1868.[11] The eight years between this baby and the last one may mean that two or three children were born that did not survive infancy. The boys by then were teenagers and strong farm workers, her oldest daughter twelve and taking on more responsibility all the time.

The Farmer’s Wife
Around 1870 Frederick transitioned from part-time weaving and part-time farming to full-time farming. He sold his oxen, as he and the boys were through clearing farmland. They had half again as much acreage in cultivation as ten years before. With his family of workers Frederick now harvested wheat, rye, corn, oats, and buckwheat. He doubled his potato and hay production and increased the butter output by nearly half. He added a flock of sheep to his livestock, and their spun and woven wool was adequate to clothe the family with woolens for the year.[12] The fertility of the farm and Friederika kept pace with each other. She grew her family, and the farm supported it well.

Another baby would come now in springtime of 1871. If her husband were still a weaver, this would have been the end of the linen production season. Now he anticipated planting and wondered what the weather would bring in the coming year. The boys, eighteen and twenty, were strong from the labors of clearing the land, planting, and harvesting. Friederika’s oldest girls were thirteen and fifteen and nearly able to manage the household on their own. The little girls were eleven and three, rounding out the family of workers on the Kicherer farm.

Friederika, thirty-eight, gave birth to yet another daughter.[13]  Sometime after this birth, maybe the same day, maybe as late as when the little girl was beginning to talk fluently and help gather the eggs, Friederika’s life passed into darkness. This last birth, 19 March 1871, was the last tangible evidence of her passing on this earth. The weaving room now quiet, the oxen gone, and Friederika, too: the Kicherer family’s life on the farm entered another phase, this time without a mother.

The remainder of this post is in two parts. The first focuses on the evidence underpinning the Kicherer family relationships. The second, a genealogical summary, presents vital data for Frederick, Friederika, and their children, along with supporting documentation.

Identifying Friederika’s Family
Proving the relationships of the Frederick Kicherer–Friederika Kellar family is challenged by a lack of birth records for the children and of marriage records for the parents and children. Unusual given names and surnames often misrepresented in existing records add another layer of complexity to proofs.

The Kicherer surname includes variants such as Keyher, Kocherer, Knickerer, and Kitchener, attempts to spell it phonetically and to conform this German surname to English. Frederick’s children shortened it to Kicher. A descendant pronounced it keeker, an approximation of the German pronunciation.[14]

Friederika’s given name is common in Germany as the feminine form of Friedrich.[15] English-speaking Americans had no trouble converting Friedrich to Frederick, but the name Friederika, with no commonly used English counterpart, caused confusion. This was especially difficult as her husband’s name was so similar to hers. The 1870 census enumerator rendered Friederika as Frederick, a male, yet her occupation was Keeping House.[16] The 1860 census lists her first daughter as Frederick, a male.[17] In 1870 this daughter is correctly listed as Fredericka, a female. By 1880 the daughter was using the name Rachel.[18]

Family sources
Kicherer descendants provided two different sources indicating that Friederika Keller was Frederick Kicherer’s wife. A family book assembled by the wife of a descendant of eldest son John gives her Keller surname, but not her given name.[19] A descendant of youngest daughter Elizabeth holds Frederick Kicherer’s 1823 German Bible. A transcription from the flyleaf reads, “Johannes. Frederick Kicherer. Born April 3, 1831 At Zaiserweiber [sic], Oberamt, Maulbroun [sic] Würtemberg [sic] Germany. He Married Rachel Fredericka Keller.”[20] The designation of Friederika as Rachel may come from knowing that Rachel was named for her mother. If so, the name was not given to Friederika (the mother) at birth.[21]

Although Friederika immigrated in 1846 with her family, she has not been found in the 1850 U. S. census.[22]  Then sixteen, she could have been living in the vicinity of her parents in Jefferson County or her older brothers in Centre County.

Friederika was enumerated only in the 1860 and 1870 U. S. censuses.[23] Neither indicates relationships among household members. The value of these censuses is that they place her in a household with her husband and children of the correct ages to be her children.

Vital records
Birth records often indicate the child’s parents. The State of Pennsylvania did not require recording of births and deaths until 1906, too late for the births of Friederika’s children. [24]

No American church records have been located for Friederika or her children. Both Lutheran and Reformed congregations existed in Henderson Township from the early 1830s.[25] Available records do not include any Kicherers.[26]

All but one of Friederika’s children died after mandatory state registration of deaths, which asked of informants the names and birthplaces of decedents’ parents. Four of six gave Keller as Friederika’s surname and three knew her given name.  Three also named Frederick as the father. Two named John, the decedents’ eldest brother, as the father. Thomas is the given name of John Kicher’s informant and of Rachel (Kicher) McPherson’s husband, names perhaps chosen in the confusion of the moment.

1. Friederikab-2 Keller (Eberhard Gottfrieda-1, A, B, FelixC) was born 12 July 1833 in Roßwag, Neckarkreis, Württemberg, to Eberhard Gottfried Keller and Rosina Louisa Rammenstein.[34] She died in Jefferson County, Pennsylvania, between 1871, the birth of her last child, and her husband’s remarriage in 1876.[35] About 1850–1851 she married Johann Friederich “Frederick” Kicherer.[36] Frederick was born 26 May 1823 to Johannes Kicherer and Christina Heugelin in Zaisersweiher, Maulbronn, Württemberg.[37] He died 16 February 1900 in Henderson Township.[38]